From Wobbling in our Shoes to 'A' Mountain, NMSU has its Great Traditions!

As a young nation met its destiny toward the west, a nation affirmed its northern borders along a great river, and others, centuries old, lived with great pride and love for their land. Brave men and women cultivated their lands to feed their families and for their communities, despite the unforgiving setting of the desert southwest. Their actions perfected their abilities to nurture a means of sustenance, making them masters of agriculture, and thus, AGGIES.
<
>

One of NMSU’s most cherished traditions is that of the “A”.   For generations, the “A” has been emblazoned on many items, buildings and landmarks boldly signifying Aggie pride.
The most popular and visible “A’s” is a yearly State tradition--the painting of the “A” on Tortugas Mountain east of campus.   The “A” stands 330 ft tall, roughly the size of a football field.
Even more interesting, is the story about how the “A” got on the mountain. In the university’s early years, students from the Colleges of Agriculture & Home Economics and Engineering would gather on around April Fool’s Day to construct a large “A” somewhere on campus that sorely stood out to the administration.
One year, the student’s realized that only one building had not been conquered--the administration building at the apex of the Horseshoe, the original Hadley Hall.   It’s steep architecture and intimidating dome proved to bee too difficult to construct an “A” on, one would even say impossible.
The relentless bunch used their fine education from State to map out the symbolic letter at a point on Tortugas Mountain, where if one stood at the base of the Horseshoe, it would appear that an “A” was standing atop the dome.   Much to the surprise of the administration, their arrival at work the morning of April 1st , reflected that the crafty Aggies had managed to accomplish the impossible.

Our Alma Mater, now to thee,
We lift our voice of praise,
We love thy walls, we love thy halls,
And all thy pleasant ways.
We love thy wisdom and thy strength,
Thy truth which makes men free.
Thine, Thine we are in peace or war,
Our own N.M.A.C.
Led by the banner’s crimson folds,
We’ll march the upward way.
As heroes of the common life
Thy sons would serve their day.
Through toil and triumph, peace and pain
With patience taught by thee,
We’ll fight our fight beneath thy flag,
Our own N.M.A.C.
With hope and courage, faith and joy,
we face the future bright;
Thy ringing call is in our ears,
they strong hand gives us might.
As thy brave sons have ever done,
So in the years to be,
We’ll guard they honor with our lives,
Our own N.M.A.C

One of the most basic symbols that triggers emotion, pride and a sense of identity is color, and when you’re an Aggie, those colors are Crimson and White.
Crimson is one of the most emotionally-stimulating of all of the colors in the spectrum. It has the widest depth of symbolism ranging from passion to anger. Crimson represents power, vigor, strength, leadership and strength.
White, to many represents Purity, Innocence, Prestige and Good. White, in many cultures is also suggestive of the springtime and summer, the seasons when crops are planted--a key aspect of this university as it deals with agriculture. And in the education setting, white represents new beginnings. 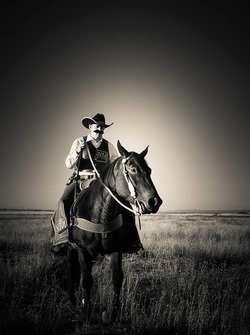 What would a great institution be without a signature icon--a symbol that represents its heritage and dedication to live, learn and thrive. A symbol that after a hard day’s work, can have a great time, get a little crazy and rowdy but still remember that there’s much work to be done the next day.
New Mexico State has had it’s fair share of, well, we won’t call them icons. One, was a combination of Zoro and Speedy Gonzales; another somewhat reminiscent of the Man in the Big Yellow Hat from Curious George.
Then the students at New Mexico State University heard a tale of one such icon.   In 1868, an 8-year-old boy worked the fields with his father, when a band of former Confederate vigilantes viciously robbed and killed the. A family friend then taught him to handle a gun and told the young man, “My boy, may an old man’s curse rest upon you, if you do not try to avenge your father.”
At the age of 15, he headed to Fort Gibson in the Indian Territory to see what more the U.S. Cavalry soldiers could teach him.   Much to everyone’s surprise, he wound up doing the teaching, out-shooting everyone with the speed of lightning using his Colt forty-five. The Young Frank Eaton was awarded a medal by the commanding officer for his excellent marksmanship and a new nickname, Pistol Pete.
By the time he was in his early thirties, he had found the men that robbed him of his father and his wild-west adventures led him to be more than a cowboy, scout, Indian fighter, trail rider and Deputy U.S. Marshall--it made him a legend.

The “PRIDE” of New Mexico is the marching band at New Mexico State University. It is composed of approximately 250 of the finest musicians, dancers, and auxiliary in the nation. The purpose of the “PRIDE” is to provide entertainment at football games, parades, and almost any NM State event. The “PRIDE” hosts a major marching band competition in the fall. High school bands come from all parts of the Southwest to compete in the Tournament of Bands. The competition lasts all day, with a final competition at night.  The “PRIDE” performs two exhibition performances at the Tournament of Bands. The members and staff of the “PRIDE” make it their goal to be the best marching band in the nation. The “PRIDE” is not just an ensemble, it is a family whose ties last forever... 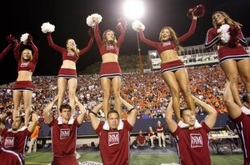 The NM State Cheerleaders have two spirit squads, a co-ed squad and an all-female squad.  The squads begin their preparation each year before school officially begins in the Fall. They attend a Universal Cheerleading Camp and begin practices in preparation for the Football season.  In the Fall both squads cheer at the NM State football games.  During the basketball season, the co-ed squad cheers at men’s basketball games and the all-female squad cheers at women’s basketball games.  In addition, the NM State Cheerleaders are asked to make many public appearances throughout the year at other athletic events, as well as University and community events.  The Cheerleaders dedicate many hours of their time to practice, games and public appearances each year to represent NM State.
Victory Bell

In the 1940s, the Victory Bell, a gift of the Class of 1939, was housed in an open-sided structure on the Horseshoe and rung to announce Aggie victories. In 1972, the bell was rededicated as the NM State Engineer’s Bell and now sits on a platform near Goddard Hall. On game days, various school organizations take turns toting the ringing bell around Las Cruces prior to kick-off. The Bell then sits at Aggie Memorial Stadium waiting to give off a triumphant chime.

History of the Victory Bell. 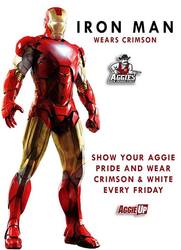 Every Friday of the year is an opportunity to support your university of choice. Alumni and fans the world over wear their Crimson on Fridays. Students, faculty, and staff blanket the campus in a sea of our most prominent school color. Businesses ask their employees to wear Crimson to show solidarity for the Aggies. This is a great tradition in which all may participate. Visit the brand new NMSU Barnes and Noble Bookstore to secure your Aggies Crimson wear today.

For every Aggie kickoff, NMSU Aggie football fans eagerly await the "Wonder Dog" to retrieve the kicking tee from the field during home football games. This fun tradition started in the mid 1990s.
<
> 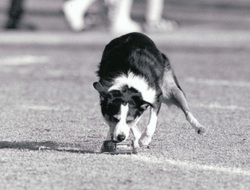 The first "Wonder Dog" was Smoki, a border collie-Australian shepherd mix born in Capitan, New Mexico in 1989. She was trained by Joel Sims, an alumnus of NMSU. Smoki "The Wonder Dog" entertained the Aggie crowd for six years, even when the football team lost.

One of Smoki's more interesting abilities was being able to open the refrigerator, pick up a can of beer, close the refrigerator and bring it to someone. She would then wait for the can to be empty then take it to the recycle bin. This became a very popular trick with Sims' friends.

Smoki was a valued member of the Aggie community. She earned the status as an honorary official of the Sun Belt Conference after public outcry when a referee wouldn't allow her to perform on the field because of a conference rule about live animals. Smoki was even rewarded with a five-year service award in 2001.

Smoki retired in 2002 after she had lost her trademark enthusiasm and her eyesight was beginning to go, which meant she no longer could retrieve the tee as effectively. Smoki would pass away at the age of 15 in April of 2005. 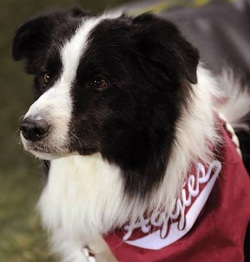 After Smoki's death, the fun tradition ended until 2012 when a tryout for the next "Wonder Dog" was held. After a deliberation that took 2 hours, the panel of celebrity judges had officially chosen Striking as the next "Wonder Dog". Striking is a 4 year old, border collie, owned and handled by Dr. Steve Stochaj, professor of Electrical and Computer Engineering at NMSU. Striking first appeared on August 30, 2012 at the NMSU-Sacramento State home game and contiues the tradition started by Smoki.

Striking also makes appearance at other Aggie event through out the year, such as Baseball and Softball games. Striking is on the Mesilla Valley Search and Rescue team, as a wilderness search dog for the State of New Mexico.